Why you should add an egg to your oatmeal/porridge

lovemyparrot
5:2 for life! 07 Mar 2013, 18:30
Orange County, Southern California
491
Why you should add an egg to your oatmeal/porridge
14 Dec 2014, 20:17
I know lots of us like oatmeal or porridge on a fast day as its quick and filling - I'd never thought of adding an egg (or egg white if you prefer) but this recipe and the photos look really delicious.

An egg was such an expensive food item back then (relatively) that the butteriness it added made him feel like a king.

Dexa scan reports that I have low skeletal muscle mass and I'm categorised as sarcopenic, despite my age and fitness activities: body composition changed from 42% body fat at 127lbs to 20% at 103lbs.

SINS - Simple Is the New Sustainable

wildmissus wrote: That sounds horrible, I had images of an oaty omlette! I have porridge most mornings and I like eggs and the pictures do look really good but surely the egg will make the porridge set. Maybe I'll try it.

@wildmissus , when I was little, making my grandfather's porridge used to make me gag because I loathed eggs back then - but, no, it didn't set, if whipped properly, it just adds a velvety unctuousness to the dish of oats, IYSWIM (like the lovely custardy yolk you sometimes get in a poached, boiled, or fried egg, you know when you cut into it and it flows like a sauce?). He especially liked it with a dash of top of the milk, a lick of extra salt, and a small crunch of Demerara sugar, iirc.

ETA: my grandfather's porridge had a whole egg but I can see how it would still work with lightly whisked egg whites - I've used egg whites with a traybake or baked granola clusters before now.

rawkaren
5:2 for life! 29 Apr 2013, 14:06
The Chilterns UK
4124
21 Aug 13
28.03
Re: Why you should add an egg to your oatmeal/porridge
14 Dec 2014, 21:19
It's only like a Dukan pancake. Two tbspn oatmeal, one egg and one tbspn fromage frais (OH has the fat free type). He has one every day for breakfast. Add salt for savory, stevia and cinnamon for sweet.
Follow my full diet journey https://diettales.wordpress.com/ https://www.instagram.com/karengeary/
Focus on your actions, not the result.

The recipe in the OP is similar ingredients but different proportions and a very different texture (definitely still a bowl of porridge rather than a pancake/galette). It may be worth trying for those people who'd like a bit more protein in their breakfast and prefer foods such as porridge to eating eggs (say)? It might also be useful for those people for whom oats are not a low GI/GL food, no matter what the standard references say and for whom the protein addition might be rather more satiating. 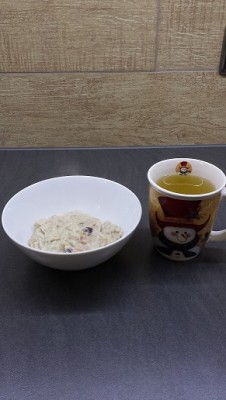 Sassy1
5:2 for life! 12 Oct 2013, 10:37
Melbourne
1841
Re: Why you should add an egg to your oatmeal/porridge
15 Dec 2014, 12:05
My usual non-fast day breakfast is 2 scrambled eggs followed by porridge made with oats and water and a few raisins. Think I would prefer to keep the eggs and oats separate - feels like I am eating more...!! But I may give the combination a go...
Goal reached December 2013, weight loss strategy 5:2, weight management strategy is eating a wide range of (mainly) whole foods but am back to following 5:2 for a while. Main eating challenge is the evening munchies!

programmedsmiles wrote: Wow! Egg in porridge sounds delicious. It would definitely make me feel really full. I'm going to try that! Thanks!

Welcome to the forum, @Programmedsmiles Please feel free to head over to the "Introduce Yourself" forum and post and introduction

One half of Bean and Oates