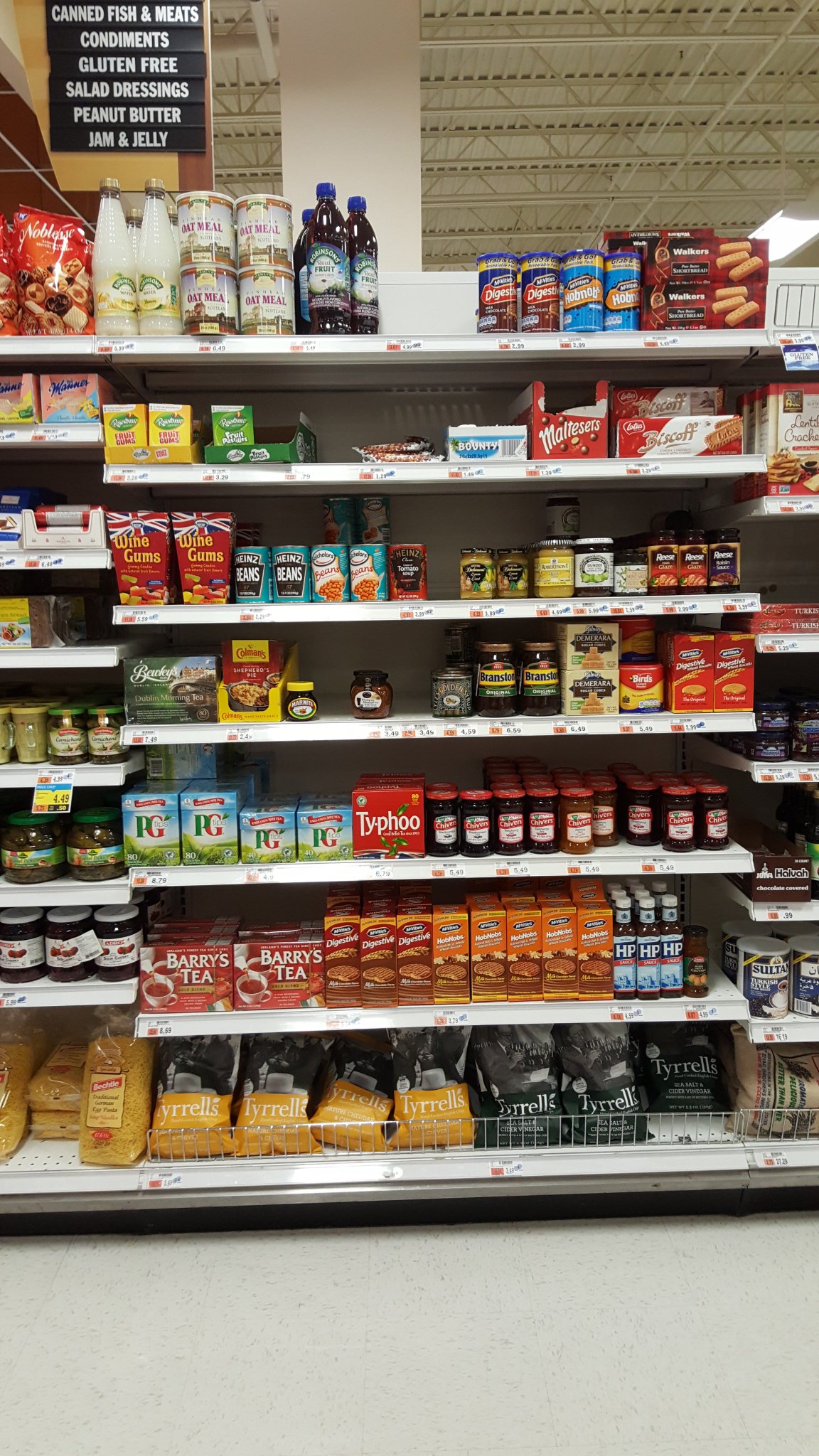 @WildMissus That empty spot on the top shelf is usually oats from Scotland. There's sometimes Cadbury drinking chocolate in there too. The selection sometimes changes. And some British brands that are popular here in in with regular food, such as Twinings tea and Carrs table water crackers.

I came close to buying hobnobs today. I managed to leave without them by promising myself I can buy a small packet in September.
Battling a naughty thyroid.

Hope you are well
Battling a naughty thyroid.

I've still been reading everyone's posts but not had much to say for myself. I'm still fasting twice a week, mostly successfully. Last week I lost one pound and I stayed the same this week. I'd quite happy with that considering. One thing I do know is that I will have to start re-focusing on healthy eating which will help give me the strength to get through this difficult period. The holiday is two weeks away but is a bit up in the air at the moment. I don't know if OH is going and I no longer want to go. The thought of the four of us spending two week is a small apartment abroad doesn't appeal anymore. The girls still want to go and I will go but I just can't get excited about it. On the eating side I see it as 2 weeks of eating olives, feta and generally fresh foods rather than over eating and drinking too much alcohol.

I am going to put my phone on charge and if I remember I will take a picture of the American section in Sainsbury's and post it later.
If not now...when?

A friend just went through a really rough patch with her husband. She couldn't take it anymore. They had been married for 20 years. She tried making him go to counseling and he walked out of the 2nd or 3rd session, claiming the counselor and wife were ganging up on him and he just wanted a divorce. It took two months for him to move out of their place and into an apartment. Their daughters were 16 and 19. My friend started dating someone else for a little while. She and her ex made a real effort to keep everything civil. Well about a year after the divorce, they actually started dating each other again, and another year later, they got remarried, to each other. Things are so much better. They learned a lot from their time apart and they actually don't regret going through the divorce, because they feel that's what forced them to start getting along. It's been an interesting few years for her. >.<


Whatever happens, I hope your road gets a bit easier.
Battling a naughty thyroid.

Tracie I went to work on Friday and left my phone in the kitchen on charge and have just realised that when I went to work yesterday I forgot to take a photo, I'm at work tomorrow so I'll see if I can remember...I'll get there eventually. That is an amazing story about your friend. I'm not sure how she can't look back on what happened and not feel a little bit bitter but at least it has had a happy ending. I've been reading some of the other posts and see that you are continuing to lose weight. I think you are doing incredibly well, you seem so motivated and have kept it going for so long. You and @Hazelnut20 have both been inspiring me for different reasons. Hazelnut for the quick weight loss and you for the long slow weight loss. I know I haven't lost much weight recently, only 9lbs, but I wouldn't have lost any if I didn't have you two.
If not now...when?

Hazelnut20
5:2 for life! 30 Dec 2013, 15:39
Somerset
1155
Re: Wild 'n' Nuts!
18 Jul 2016, 22:32
Hello buddy - just swinging by to say I'm thinking of you. Would've written something last night...but I'd got quite involved with some prosecco, gin and elderflower liqueur all together at a lunch party...and I was fit for absolutely nothing! Fell asleep on my sofa clutching a cup of tea & wishing the room would stop "moving" quite so much! Woke up only once I'd spilt said tea (cold variety by then!) all over myself. Took me quite some time to work out what day of the week it was...and so on!! Quite amusing in some ways.....

That was such a great trip. We really love your country.

As for my friend - she was so angry with her husband. I basically forced her to ask for counseling. She had wanted to demand a divorce. I told her not to be the "bad guy" and to demand counseling. She was so relieved when he asked for the divorce. I think she got all of her anger out at around that time. They were determined to not make it hard on their kids, they were determined to be civil and remain friendly so there would be no weirdness at things like graduations or weddings or grandbabies. They made an effort to never speak ill of the other parent around the kids. And over time, their anger at each other went away. By the time the divorce was actually final, they weren't pretending to be civil for the girls. I know my friend signed the divorce papers with just a bit of uncertainty, but "well it's too late to back out now." I think it was a few months before they had dinner alone without the girls. But time apart apparently taught them why they had gotten married in the first place. She now says it was a very expensive lesson to learn, but she's not sure that they could have learned it any other way. She said the only thing she's sure of is that she couldn't have taken the way things were any longer.

So I hope that story helps. Of course everyone has their own story to tell, and the most important is that making an effort to end things the right way may help more than you realize. I think even if they hadn't gotten back together, my friend felt so much better not trapped in how awful their marriage had become.

Hey, and 9 pounds is fantastic! Are you kidding - I've had plenty of months where I wanted to lose weight but didn't lose anything for one reason or another. Slow and steady wins the race. Just keep on keeping on.
Battling a naughty thyroid.

@Hazelnut20, that's not like you but if you are going to do it you may as well do it in style. Did you have a sore head?

@Tracieknits, thanks for the insight into your friends story. At the moment I have got myself into a place where I am behaving well and not succumbing to his bad behaviour thereby keeping a good relationship with the girls. I hope it lasts as it is a struggle with all the hurt he is throwing my way which I appreciate he is only doing as he is hurting. We both need space from each other but he won't give me that. I'll just have to be patient.
If not now...when?

CandiceMarie
5:2 for life! 03 Sep 2013, 17:58
UK
8900
Re: Wild 'n' Nuts!
20 Jul 2016, 11:48
@wildmissus so pleased @tracieknits got in touch and i congratulate you on still fasting,still losing even tho lifes tough right now. Well done for not falling into that trap of comfort eating junk.
Love that you plan to eat all that good stuff on hols. Sending hugs! X
Ps youre right..@hazelnut20 to be commended on her BSD loss,@tracieknits on her longterm slow loss. Both to be congratulated on being supportive and kind forum members xx tracie was my first pal on here..almost three years ago now! X
Remember how far you've come, not just how far you've got to go.
You may not be where you want to be,but neither are you where you used to be!
~~~ ~~ ★♥.•° ♥ »☆ ~~~~

Your holibobs are fast approaching @wildmissus! How is the packing going??? Bet the girls are so excited!

Have emailed you recently....did you get it? Computers hate me...so nothing would surprise me. Please drop me a quick line to let me know how you're getting on...

We (all 4 of us) are going on holiday on Friday! Things are still very tense and at the moment not a word is exchanged between us on most days. Last week he stopped the verbal poison, which I have been coping well with, but now he is chatting away to the girls and managing to add in snide comments aimed at me. The more he does the verbals the more he is adding another nail in the coffin and he has a lot more nails to throw my way. I have been spending a lot of time on the internet researching things and even looking at houses! Buying a new house for me and the girls is a long way of and may never happen but it perks me up and gives me some light at the end of the tunnel.

I must go and write some details down for the cattery and get the house cleaned. I'm looking forward to the sun as the weather up here hasn't been great. I'm hoping for lots of sleep on holiday and I will see if I can do some healthy eating. How good would it be to be able to come back from holiday losing weight.

Ooo...just as I press submit @Hazelnut20 is writing a post. Yes I got your email and I'll reply later.
If not now...when?

Feel free to reach out if you need to vent -- do you still have my email?
Battling a naughty thyroid.