My 6 Month Journey (Yes, there are pics!)

PeonyBlue
5:2 for life! 16 May 2014, 00:36
Brizzy, Oz
190
23 Mar 14
23.72
18.2kg
My 6 Month Journey (Yes, there are pics!)
19 Sep 2014, 01:18
Several months ago, I posted an extended missive in the “Introduce yourself” topic. Then, I invited you to make a cuppa before reading on (I’m never really short on words!) Now might be the time to make a cuppa again, as 6 months after starting this way of life I think I’m finally ready to move into maintenance mode, and I suspect I’m about to get reflective about my journey. So settle in and read on if you’re up to the novel that’s probably going to follow (or just skip to the end for the ever important before and after pics!)

So, six months ago…I’d never really realised that the weight had started to build up. Can’t imagine how it happened!

It was only after my sister got to the stage of needing a kidney transplant that the matter of my size came to my attention. The transplant nurse chatted with me about the possibility of my being a donor and of course she needed a few vital statistics – age, height, weight. I could answer the first two on the spot – 40 years, 174cm, but weight? I hadn’t seen a set of scales in years! I dusted them off, stood on them, and got the shock of my life when the figure of 90kg came up. Really??? She hummed and hawed for a few moments and then proceeded to inform me that I was bordering on obese, and obesity could rule me out of being a donor. Eeek! Something had to be done!

I’d watched the Horizon documentary when it first aired in Oz. I’d thought then that 5:2 sounded pretty good in principle, and after a bit of research I thought it was worth giving it a go. I decided to give it a good 8-10 weeks to see whether it might work (my other sister had attempted 5:2, but hadn’t lasted much more than a week). I attempted my first fast during the last week in March…and found it surprisingly easy. I’d already had a habit of missing lunch occasionally while I was at work, so just having a smaller than normal breakfast and dinner didn’t seem too much of a stretch. But the next few fasts started to get a bit harder…not so much with hunger – I never really seemed to feel that, but it was the spacey feeling, the dizziness that sometimes hit that I found hardest to deal with. Here the forum helped with suggestions of miso soup or broth, and I found that made a difference.

Shortly after, I started an activity and eating journal on a calorie counter app as I really had no idea what constituted an appropriate number of calories to achieve my TDEE. It too was a real eye-opener. I was so taken with a dieting lifestyle that I discovered I had swung too far the other way, estimating that I was barely eating 1200 calories on my feast day…no wonder I was losing weight at an amazing average of over 1kg a week…and no wonder I was feeling pretty spacey and listless all the time. I upped my feast day eating to average something closer 1800 cals, and I never looked back. About the only things I’ve cut from my diet are sugary fizzy drinks and fruit juice, otherwise pretty much what I always had (including a little chocolate & ice-cream, beer & wine). I started wearing a pedometer to keep track of my steps, aiming for 10,000 steps in my day. Throughout it all it’s been the only exercise I’ve done (with the exception of moving house, which was and extended workout session all by itself!)

So here I am, almost exactly 6 months after I started this journey…and I can’t believe I can say this, but I have lost 20% of my starting weight – a total of 18kg!

My BMI is comfortably in the healthy range and I’m fitting into my old clothes again. I love the comments that I’ve been getting from work colleagues, but most of all I love the energy that I now have. At the start of the year I was always tired and lethargic, thinking that I was going to have to go see my doctor to have my thyroid checked. Now I have the energy to make it through a busy day and still feel enthused about doing things on the weekend…even chores! The other thing I’ve noticed is that my depressive lows that I periodically go through have been much gentler and easy to manage – that was something I hadn’t expected. I’ve dealt with stresses (and I’ve had many big things come up over the 6 months) much better than I have in the past. I don’t know if fasting is the direct cause of all of it, or whether feeling good about myself has led to a better frame of mind, but all I can say is that I am in a much better place physically and mentally than I had been earlier in the year.

I definitely extol the virtues of 5:2 with anyone who asks me. My biggest tip is to find the right headspace before you start…I think once your thoughts are in the right place, everything else follows.

So now I have maintenance to look forward to…and a wedding on New Year’s Day, so I have motivation to keep this new figure. (I start making my dress next week, so I don’t want to have to make major adjustments!) I’ve really appreciated the fasting days, and I’m hoping that 6:1 becomes a working maintenance plan for me. I’m going to keep daily weighing and food journaling until I’ve worked out my maintenance plan, and then hope to relax into weekly weighing and no journaling.

And lastly, since I know you all want pics – here they are!

Before: Apologies for the “interesting” before pics – I never took proper ones and try to avoid photos. These are from the end of 2013, during a big talk I had to give at a conference. I was probably a little under my top weight of 90 Kg.BMI – 29.75 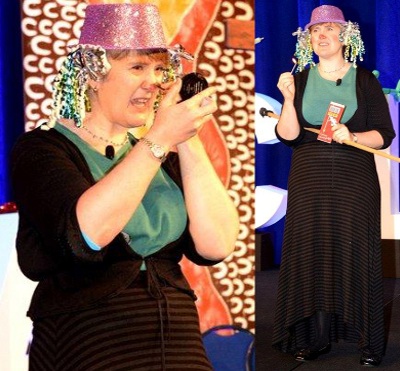 After: Wearing the work outfit that always gets comments about how much weight I’ve lost! 72kg, so a loss of about 20%, BMI 23.75. 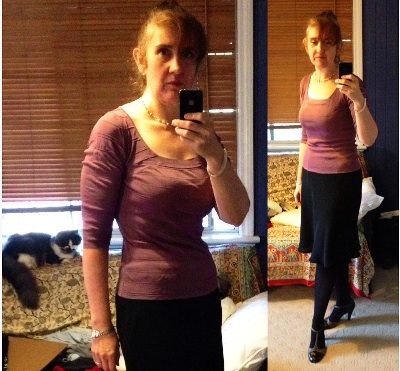 You have done fabulously and are a prime example of what can be done. Thanks for sharing and I love your little essays so keep them coming. I can feel your happiness from here, and I'm seriously happy for you.

My maintaining buddies are PennyForthem, Wendy Darling, StowgateResident and Auriga!

Wendy Darling
5:2 for life! 08 Apr 2013, 19:03
Never Never Land, East Anglia, UK
1213
1 Apr 13
21.68
9.07kg
Re: My 6 Month Journey (Yes, there are pics!)
19 Sep 2014, 08:08
Wow! Well done, you look great and your waist is enviable! Are you coming into the maintenance tent? Can't remember if you're in there or not already. Your story definitely deserves to be in the inspirational stories thread, @carorees @carieoates what an inspiration you are. Looking forward to seeing pics of you in your wedding dress. Thanks for sharing
My personal take on 5:2 is;
Fasting on Mondays and Thursdays 5:2 36 hours
Green tea all day then less than 500 calories in one meal in the evening.
16:8 all the other days, wey-hey at weekends and daily weighing
It worked for me sloooowly Scubachick
Goal weight achieved on 22nd September 2014! 32lbs lost within 8 months.
Still fasting on Mondays & Wednesdays, just to maintain
Please excuse my typos/spellings. I am struggling with a small smartphone keyboard, fat fingers and an auto correcting function with a mind of its own.

Dexa scan reports that I have low skeletal muscle mass and I'm categorised as sarcopenic, despite my age and fitness activities: body composition changed from 42% body fat at 127lbs to 20% at 103lbs.