anacara
5:2 Faster 21 Apr 2013, 18:34
20
Perfect Health Diet (Paleo with starch!)
17 Jun 2013, 18:45
For those of you who are interested in a "Paleo"/"Primal" way of eating but find it too restrictive, you may want to check out the "Perfect Health Diet". It's more or less Paleo but more flexible, and the couple who devised it (both scientists although not in nutrition) were basically researching ways to improve their own health.

The biggest departure from Paleo is that they advocate the addition of starchy foods like rice and potato, some starchy carbohydrate being essential to good health (according to their assessment of the data).

It seems pretty sensible and I'm enjoying it along with my IF.

Anyway, here is a link to the site: http://perfecthealthdiet.com/the-diet/

I am also uploading their food apple (as opposed to pyramid!)

Hope it's of interest! 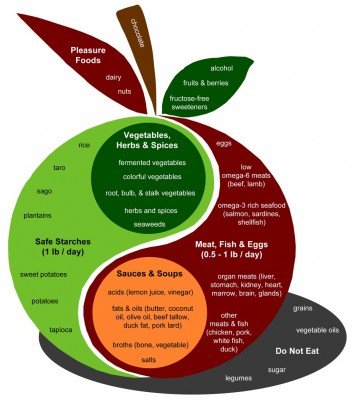 In the shadow of the apple are foods forbidden because of their high toxin content. Notably:

Do not eat cereal grains — wheat, barley, oats, corn — or foods made from them — bread, pasta, breakfast cereals, oatmeal. The exception is white rice, which we count among our “safe starches.” Rice noodles, rice crackers, and the like are fine, as are gluten-free foods made from a mix of rice flour, potato starch, and tapioca starch.
Do not eat calorie-rich legumes. Peas and green beans are fine. Soy and peanuts should be absolutely excluded. Beans might be acceptable with suitable preparation, but we recommend avoiding them.
Do not eat foods with added sugar or high-fructose corn syrup. Do not drink anything that contains sugar: healthy drinks are water, tea, and coffee.
Polyunsaturated fats should be a small fraction of the diet (~4% of total calories). To achieve this, do not eat seed oils such as soybean oil, corn oil, safflower oil, sunflower oil, canola oil, or the like.

dominic wrote: Interesting, but what is their objection to legumes?

They expand a bit on this matter in bits and pieces throughout the site, but probably much more in the book:

"Most foods haven’t been thoroughly evaluated for toxins, so there’s some guesswork. But on a gross level, if you feed the beans (kidney beans, black beans, pinto beans, soybeans, you name it) raw to animals, they’ll get extremely sick or die. We list a bunch of examples in the book. Toxins include not only lectins but alpha amylase inhibitors, trypsin inhibitors, cyanogenic glycosides, and others. Cooking somewhat detoxifies them, but not entirely. Peanuts and peanut oil are also problematic. Some vetches cause irreversible paralysis from neurotoxins.
On the other hand, I’ve never heard of anyone, human or animal, dying from peas. We eat peas a lot, including snow peas and sugar snap peas. Likewise green beans, although much less often than peas.
So, yes, just like white rice is an exception to the “don’t eat grains” rule, peas are an exception to the “don’t eat legumes” rule."
Last edited by anacara on 17 Jun 2013, 20:05, edited 1 time in total.

carorees wrote: Of course, the hormesis theory suggests that we should not necessarily exclude a food because it contains toxins!!!

TML13 wrote: That is weird...
In the Greek Paleo there were grains and legumes (and some nuts too).

I'm not sure where this idea comes from, as Paleolithic refers to the period before agriculture. There was probably some grain and legume consumption but it would have been very minimal from wild sources.

TML13 wrote: It comes from findings. The Greek Paleo is very different from the Paleo of Northern Europe, and what Brits call "Paleo". If you are interested, I could translate the list of what they ate for you.

You don't need to translate the list for me, I'm a professional Greek-English translator

However, by definition, they cannot have been eating a Paleo diet incorporating substantial legumes. As I said before, Paleolithic refers to the (very long) period before the advent of agriculture 10,000 years ago or thereabouts.

Sorry - our posts are crossing over! If you can provide me with the references, I would be interested to see.

TML13
5:2 for life! 21 Mar 2013, 15:59
Athens, Greece
3559
19 Mar 13
22.46
8kg
Re: Perfect Health Diet (Paleo with starch!)
17 Jun 2013, 21:53
I don't have references now, since all the info I have is from a friend who has attended some of the excavations. There are very few of that time but the findings were proving that those who lived in Greece in the Palaeolithic Era were eating -among others- grains (barley, oats), legumes (peas and lentils) and nuts (peanuts, almonds).
Even in the book of 3rd grade, they mention grains and nuts collection.
I can ask her if she can refer a book or a website.
The man who can dominate a London dinner-table can dominate the world. Oscar Wilde
Post a reply
Previous 1, 2 Next
23 posts Page 1 of 2
Return to Resources & Links