5:2 Questionnaire results...stats and everything! Must read!

Azureblue wrote: Fascinating reading and thank you so much for all your hard work.
Wonder if anyone in the greater out there will pick up on it?

Auriga
5:2 for life! 05 Oct 2013, 12:49
Norwich
1377
1 Sep 13
23.92
5kg
Re: 5:2 Questionnaire results...stats and everything! Must r
10 Dec 2013, 12:20
Thank you so much for all the hard work. Hubby and I weren't members when the questionnaire went out: as staunch 4:3ers it would have been nice to get some details on the effects of this regime as opposed to 5:2, but I think it may work faster as suggested. Hubby had a higher BMI to start with than I had and he lost weight faster, which proves a point (jealously regards hubby). We instinctively changed to 16:8 as that proved effective from experimenting on ourselves. I think your next move might be to write a book detailing the findings!

Plenty of evidence on this forum alone

The length of the period without food on feed days does not appear to have an effect on weight loss in our data.

-does that mean doing the odd 16:8 on non-fast days has no effect? I've been led to believe from conversations on here that restricting the 'feeding window' on feed days, while not as effect as an actual fast with calorie restriction, does help with weight loss.

carorees
5:2 for life! 10 Jan 2013, 22:33
Worcestershire
6764
5 Nov 12
24.76
38.4kg
Re: 5:2 Questionnaire results...stats and everything! Must r
16 Dec 2013, 17:02
I think that the low calorie intake together with a long fast on fast days will result in insulin levels falling more than if the person has their calories in lots of mini meals. On non-fast days, the value of longer fasts (i.e. 16:8) may be overridden by the food choices during the 8 hours. So our finding that a change to healthier eating (which included a general reduction in calorie intake on non-fast days) is associated with faster weight loss probably hides the impact of 16:8. So, if doing 16:8 means you eat less and healthier then it will help.

For me, skipping breakfast means I eat less carbs as all my favorite breakfast foods are carb based and contain sugar plus it helps preserve the reduced appetite I get from fasting, while not eating in the evening also reduces the chance of eating desserts/biscuits etc after dinner, again making my diet more healthy.
Weight at start: 105 kg; dress size UK 20
Target, 65 kg, reached 15 May 2014 - 18 months after my first fast
Current weight: 66.4 kg; dress size UK 8-10
Maintenance weight range: 64-67 kg
My method: 8 months of 5:2, remainder and maintenance 16:8 + low carbs
My story here
Follow me on Twitter @CJstGR

Moogie wrote: Someone who understands how Wikipedia works should get this added as a reference on their (very poor) 5:2 page -
http://en.wikipedia.org/wiki/5:2_diet

I just clicked on this link, first line says that 5:2 is a fad diet.... cobblers! Not reading any more of that

A mistake is evidence that someone tried!

lizzieh wrote: -does that mean doing the odd 16:8 on non-fast days has no effect? I've been led to believe from conversations on here that restricting the 'feeding window' on feed days, while not as effect as an actual fast with calorie restriction, does help with weight loss.

I'm interested, because I've been doing 16:8 on one or two days each week in between fast days, for about 6 weeks now, and although to start with it seemed to accelerate my losing a few pounds, I've also gained some back and I'm wondering if the net result is worth it.

@lizzieh and @carorees
I just had a look at the data again and here is some additional info.
Average weight loss for different categories of calorie free period on feed days is as in the table (see picture). It shows that only 9 women are using a calorie free period of more than 16 hours. 12 to 16 hours is a somehwat broad categorie if you want to measure 16:8. Apparently the differences between the groups are not large (only for the longer than 16 hours group, but here we have only a few cases!) In a statistical analysis this is not really significant (0.093 in 2-tailed testing), but this might also be the result of not having enough women using this strategy to make an impact in the analysis. Be aware that this does not take the other factors into account. As presented in the paper, once these factors are taken into account, the fast on feed days factor is clearly not significant. As carorees has suggested, this is probably also the result of the fact that longer fasting on feed days is related to the other factors that do have an influence on weight loss. I looked at the correlations and two of them are significant: women who fast longer on feed days also opt for longer fasts on fast days (correlation 0.29) and choose for healthier diets on feed days, as carorees suggested (correlation 0.19). So, part of the higher weight loss of women who have longer calorie free periods on feed days (in the table) is due to the effect of the two other factors. 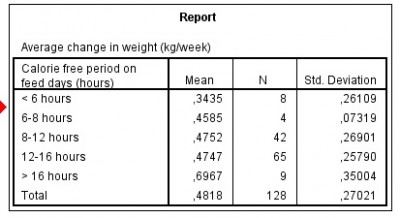