mummybunny2005
5:2 for life! 23 Apr 2013, 10:24
Hedgerows, UK
357
17 Apr 13
24.03
6.7kg
Re: Poll: Fast days - one meal, two, three, more? please re-
23 Apr 2013, 11:41
I restarted this plan last week having done it for 3 months last year and only lost a pound. I did feel however that I had lost inches as some clothes started feeling better. I stopped for Christmas and then had surgery in January, from which I spent February and March sedentarily recovering. With that and a holiday in the winelands of South Africa in early April, I gained a stone I really didn't need. I'm really glad they are researching why some lose quickly and others don't, and as soon as I've been doing this for a month I will submit my stats to be part of it. I have found that the easiest way for me to get through the fasting is to have one meal in the evening, which will usually be an M&S or Waitrose lo-cal ready meal (which are rather good) and a "pudding" of something like an apple with a smear of peanut butter. I drink lots of water, diet Coke, coffee and tea through the day (I do add milk but take it skim wherever I can and subtract 50 cal from my daily allowance). I don't eat anything else during the day - like others I find that if I eat anything at all it makes the hunger harder to bear. I am also exercising now - at least half an hour a day - which I wasn't doing before. Fingers crossed this time I do lose weight - I don't know what else to do!

The other reason I chose this option is the concern of finishing the day hungry. I feel if I can have a bigger evening meal, there is a greater chance of feeling full, allowing for a better nights sleep

"We are what we repeatedly do, excellence then is not an act, but a habit"
-Aristotle

gigi55
5:2 for life! 04 Mar 2013, 00:55
Sydney, Australia
455
4 Mar 13
27.40
12.7kg
Re: Poll: Fast days - one meal, two, three, more? please re-
01 May 2013, 02:44
I have half a cup of skim milk in the morning to take medication, then usually nothing till 6pm-ish dinner.
If I really need it I'll have a fruit snack of about 40cals around 3pm which carries me through till 5.30-ish when I start cooking dinner.
I always find that once I start getting dinner ready I don't feel very hungry anymore and can happily wait. Very strange what our minds will do.
"When engaged in eating, the brain should be the servant of the stomach" Agatha Christie Sounds like mindful eating to me!

Sarahg
5:2 for life! 01 May 2013, 05:27
392
Re: Poll: Fast days - one meal, two, three, more? please re-
09 May 2013, 00:19
Just voted.only been doing this for two weeks.i like to go as long as possible without eating,eat really late lunch ,then smallish dinner and late evening snack.going to try getting to dinner without eating but not quite up to that yet.i make a veg soup so low in cals which I eat late afternoon....think I worked out its about 50 cals a cup ,lots of celery ,cabbage,cauliflower mushroom.also et greens as a salad for lunch ,not much cals there
Love this forum .thanks all

I've lost 20 pounds in my first month of fasting, insanely (I'm like WHAT??) so I think I'm doing it right.
Check out my health and fitness blog:
http://meaningfulactivity.blogspot.in/

And my main, lifestyle blog:
http://www.thesongsontheway.com/

Jgger76
New Member 18 Mar 2013, 19:53
2
Re: Poll: Fast days - one meal, two, three, more? please re-
28 May 2013, 18:14
I'm finding it so hard to get through the afternoon that its making me wonder if I'm following the wrong routine. Currently having small breakfast (egg and tiny bit of porridge), apple for lunch then 300 cal dinner. Afternoons a real, real struggle, feel very weak and unable to concentrate. Any advice? Feel good otherwise.

I either go for liquids only or evening meal ....

renaissancelady46
5:2 Faster 07 May 2013, 00:38
16
Re: Poll: Fast days - one meal, two, three, more? please re-
29 May 2013, 09:33
This is interesting but I believe mathematically the percentages are incorrect because you are allowing people to select more than one answer. A more telling way to do this would be to separate meals from snacks as far as the statistics are concerned. Thus, vote first for meals, then vote separately for snacks/no snacks.

Jgger76 wrote: I'm finding it so hard to get through the afternoon that its making me wonder if I'm following the wrong routine. Currently having small breakfast (egg and tiny bit of porridge), apple for lunch then 300 cal dinner. Afternoons a real, real struggle, feel very weak and unable to concentrate. Any advice? Feel good otherwise.

Try replacing the lunchtime apple with the equivalent calories in almonds. Should avoid the blood sugar swing of the apple :- 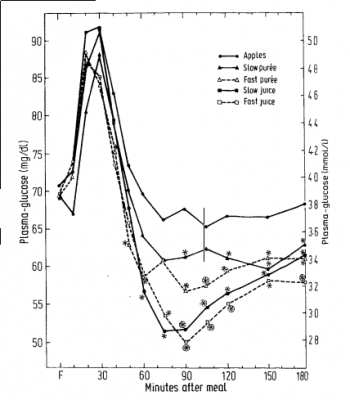