CandiceMarie
5:2 for life! 03 Sep 2013, 17:58
UK
8900
Re: The WAGS tent!
22 Jun 2015, 19:12
Oh @ferretgal how lovely you have a Ziggy too! And that he's living a long healthy happy life!
I bet he could give Ziggy Junior a few lessons in life..he is still a silly kitten
He keeps eating bees and stinging his nose and his paws..he has stripped off all the mastic from around windows and doors
Yesterday he went missing completely and was eventually found next door...asleep in their wardrobe!
Any photos of Ziggy Senior to share?x
Remember how far you've come, not just how far you've got to go.
You may not be where you want to be,but neither are you where you used to be!
~~~ ~~ ★♥.•° ♥ »☆ ~~~~ I am perfect just the way I am, as are we all.
5:2 is my Way of Life...weight loss is only one "side effect"
Fasting day=Light day, Nonfasting/feast day=Normal day

I am perfect just the way I am, as are we all.
5:2 is my Way of Life...weight loss is only one "side effect"
Fasting day=Light day, Nonfasting/feast day=Normal day 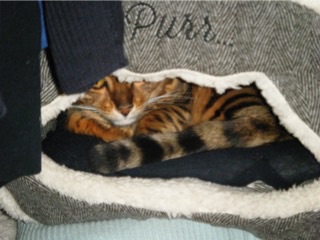 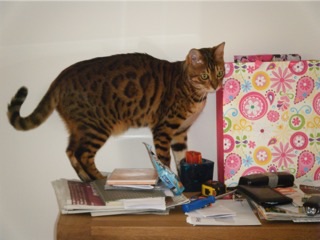 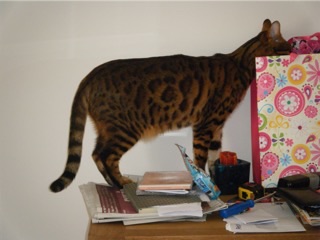 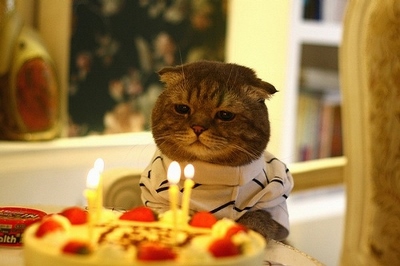 StowgateResident
5:2 for life! 11 Feb 2013, 13:24
South Lincolnshire
1993
27 Jan 13
23.10
10.45kg
Re: The WAGS tent!
11 Jan 2016, 13:39
@Lizbean, how lovely that you are now ready to welcome another cat, or two, into you life!
My mother re-homed two elderly cats and had no problem with them because they had lived together all their lives. They came to me when my mother had to go into a residential home. I also did the same thing a few years ago with two cats who needed a new home. They too had lived together and were aged four and seven. Sadly we have since lost Lola, the eldest, but Poppy is still living happily with us.
Many years ago I had two kittens from the same litter and they caused an enormous amount of damage to the house and furniture because they chased and played together most of the time they were awake. It's surprising how much damage tiny claws can do in a short space of time! They grew up to be lovely and affectionate cats but those early months were quite a trial!
Whatever you decide, I'm sure that your new cat(s) will bring you joy! Keep us posted!
Maintaining at 147 pounds (in theory)!

I took her myself, much more easy that way and all was calm and serene. Arwen had a hard time to adjust and cried every day for som weeks. Now we are back to normal and I have to confess that things are a bit more easy and quiet around here.
Fiona was my first pet ever and before Arwen came it was me and her and she was my lifesaver in every sense. 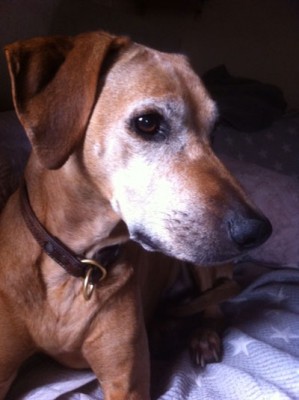 ferretgal
5:2 for life! 08 May 2014, 00:05
Seattle, WA
632
24 Apr 14
27.44
15.29kg
Re: The WAGS tent!
12 Jan 2016, 17:14
Hello, @CandiceMarie! Strangely enough, even though I've been a BIG fan of Bowie's since age 19 (1975), "my" Ziggy isn't named after La Bowie's alter ego. I am normally not all that upset by celebrity deaths, but am sad about this, mostly for us, losing such a genius. Note that my new avatar IS my Ziggy! My local radio station played a lot of Bowie yesterday: bittersweet. I've seen him (with my sister) every time since the mid-70's that he's come near Seattle (once in Portland OR). Unfortunately, that was just late enough to not get to see Ziggy Stardust live. But unlike many other fans, I never wanted him to revisit that character; I understand when a true artist is done with something, that's it! (as a side note: I am also a big Led Zeppelin/Robert Plant fan--and yes, I saw Zep live three times, including the Kingdome show--and I understand why Robert isn't interested in revisiting his youth).

Kitties are doing well; Ziggy so well at his checkup in December the vet didn't draw blood! He'd gained a pound! Seems I've finally found how to feed him (and some natural meds) that agrees with his finicky belly. Gandalf is as rumpled and naughty as ever...
I am perfect just the way I am, as are we all.
5:2 is my Way of Life...weight loss is only one "side effect"
Fasting day=Light day, Nonfasting/feast day=Normal day
Post a reply
Previous 1 ... 30, 31, 32, 33, 34, 35 Next
524 posts Page 33 of 35
Return to Fastonbury Glamping Grounds